Want to install faux shiplap at no cost? You’ve seen people draw pencil lines on their wall and getting awesome results? Here’s the truth.

In the first week of the $100 Room Challenge, I planned to cover the back wall with shiplap. I thought I’d find a clever solution between real shiplap and the faux shiplap made with plywood strips that can be seen everywhere lately. 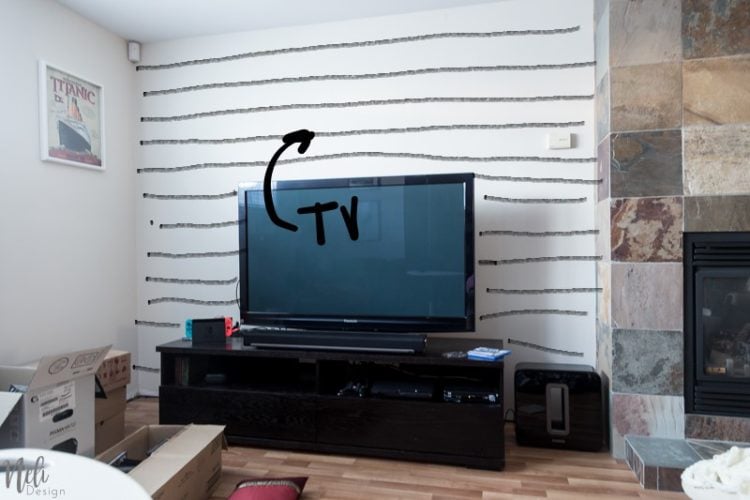 The goal was to hang the TV on the wall and the shiplap would have provided a solid backing. Since my family room is in the basement it’s a foundation wall so there’s no stud behind the wall, but 1 “x 3” strips.

Once the room was picked-up (see week 2 ), I found a major obstacle for my project:  winter!

Yes, we have a lot of snow here in Quebec. Even if the store cut the plywood into strips for me, I would have to cut it to the right length. In other words, I should have done a series of:

Not abandoning, I began to wonder what I might do to enhance this space. And that’s when it hit me! 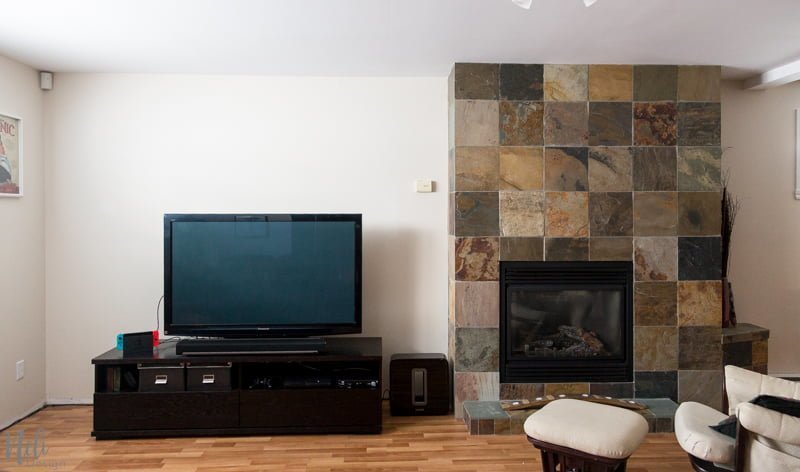 I already have a beautiful stone fireplace. Do I really want to divert attention to the TV? Put a white shiplap wall behind the TV of it would only bring it out more.

It is always important to ask yourself what you want the focal point of the room to be.

So I did the opposite and decided to paint the top of the wall white and the bottom a dark gray. It’s actually the Sico colour of the year 2018: Cast Iron (6173-83). 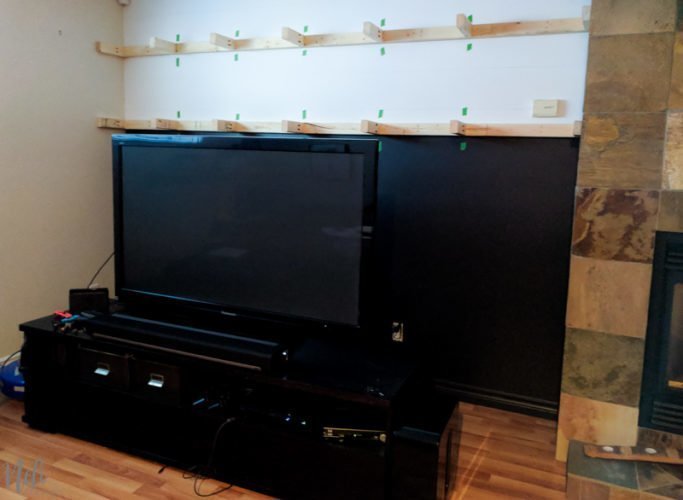 And voilà, the television is suddenly way less important!

I also decided to install two large shelves in the white part (coming next week) telling myself that I could put shiplap in this section. After a few calculations $$, I quickly came to the conclusion that I had to say goodbye to shiplap!

The truth about faux shiplap

If you do a quick search on Pinterest, you will see that some people have made faux shiplap at $0 simply by drawing pencil lines on the wall.

Good thing I did not have a big surface to cover because it’s the worst idea I’ve ever had!

If, like me, you are just a bit perfectionist, don’t even think of doing this!

I started to draw with a pencil, telling myself that I could erase if I made a mistake. Obviously, only a little millimeter of offset and I wanted to erase! Big mistake! It made a “beautiful” smudge! Maybe it’s just because my painting was freshly applied, I can’t say for sure.

And I worked with a level, so for sure it also left traces, even if it only slightly rubbed the wall. 🙁 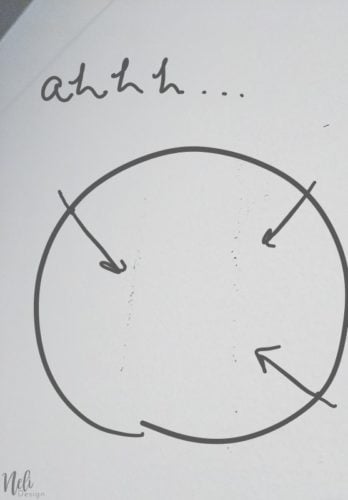 The final look is not at all live up to my expectations. I asked my 9-year-old son: “Look at the beautiful planks Mommy installed!” Even he saw it was traced lines. As they say here, it’s beautiful from afar, but far from beautiful !!! 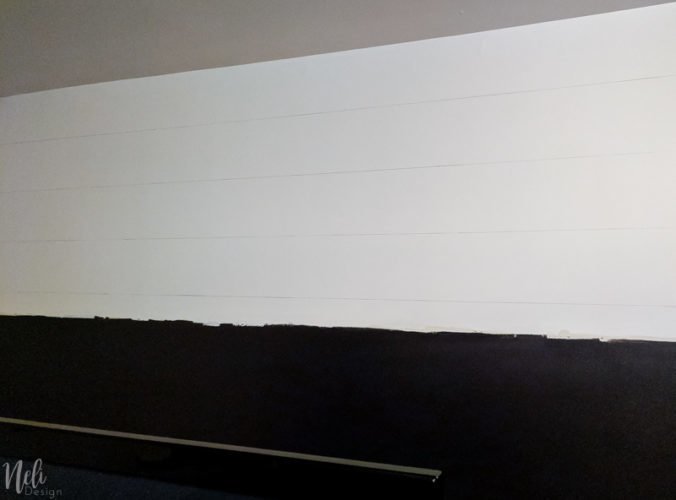 I thought to trace back with a black pencil, but I did not have the courage. I was afraid to do more damage to the wall. Maybe I’ll try my luck once the shelves are installed … to be continued!

** UPDATE: Check out my take 2 on faux pencil shiplap

Come back to see the reveal next week.

Here are again all the post on this challenge 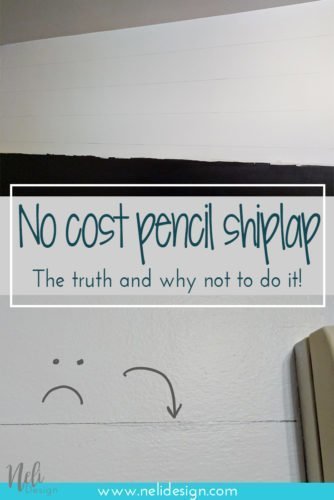 See at which Link Party I like to participate here

Now let’s see what the other participants are doing

Wow, I wouldn't have thought to try this - glad you did it so no one else has to! Thanks for sharing with Party in Your PJs!

Thanks for your Party!

Oh, man! Your experience is exactly my thought on those 'faux' shiplap with pencil lines tutorials. Easily turned into beautiful photos (with plenty of post-processing), but, not pretty in real life. At least you didn't have to brave the cold every few minutes to give that one a go! Thanks so much for sharing at the #happynowlinkup!

Haha! Exactly! Thanks very much for the linkup!

What a bummer! I love that you share the ups and downs! :) I've "seen" it in blog world with a sharpie. I wonder if that would make a difference? Can't wait to see the finished project!

Hi Lori, Just posted a blog post late yesterday about what I did with ink to correct it :)

I wondered about faux shiplap. I think I would be like you and not be happy with a pencil line on my wall. After all the beauty of shiplap is the texture.

Bummer Natalie! I’m so sorry it didn’t work out but I don’t blame you one little bit for not taking a million trips in the freezing cold to the shed! Nope. I love the paint colors you chose and can’t wait to see the shelves. I would be awful at the pencil lines, you were brave to try!

Thanks Melissa! :) We just had another snow storm and I'm so glad I didn't tackle this shiplap wall!!

This site uses Akismet to reduce spam. Learn how your comment data is processed.