For Halloween, I’m making a Splatoon 2 costume for my son. So here’s the first part, making the tentacles hat.

After a month of taking care of my daughter’s room for the $100 Room Challenge, I had a little boy waiting for me and saying “it’s my turn Mom!”

I promised him that in October, we would work on his Halloween costume. I really like the idea he came up with. The kind of idea that makes my brain run at 100 miles an hour!

For the uninitiated, Splatoon 2 is a game available on a new console Nintendo Switch. The goal is to paint everything the colour of your team. We have neither the console nor the game, but my son dreams about it! So here’s the major character on which we based the costume.

But, it had to be blue, it was a requirement of the little client! 😉

This post is about the making of the hat (or hair, that they call “tentacles” in the game), but in the following days there will be other posts about:

**UPDATE: I now have a free SVG cut file that you can use with your Cricut Maker. It will cut everything for you! Just use the “Fleece” setting and the Fabric wheel.

If you know me a little, you know that sewing is not in my field of expertise, but I can do it! So I was not going to come up with a pattern for the hat, it was beyond my skills. Thus I found this post that has a free pattern and a video (hallelujah!) To make a  basic fleece hat.

If you don’t feel comfortable sewing a Fleece hat, you can always find one here 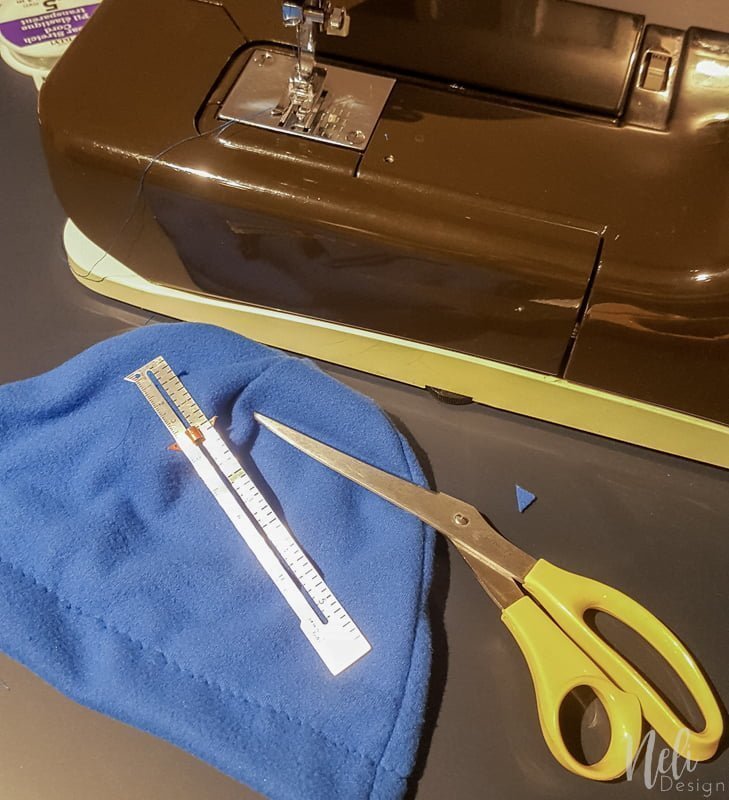 You see this,  my sewing machine is brown! That gives you an idea of how old it is! But it was given to me by my mother-in-law and it is plenty considering my talent in sewing!

Once the hat is done, I created a pattern to achieve the tentacles. Only the piece in the center of the “hair” is larger, the other 5 are identical.

The tentacle in the center

As this one was going to be “inflated” I decided to paint the blue points before sewing. I used the GAC-900 mixed with blue acrylic paint (1:1)

On the pattern, you’ll find 3 points in the corners. You’ll need to aligned and fold the fabric as shown in image 2. 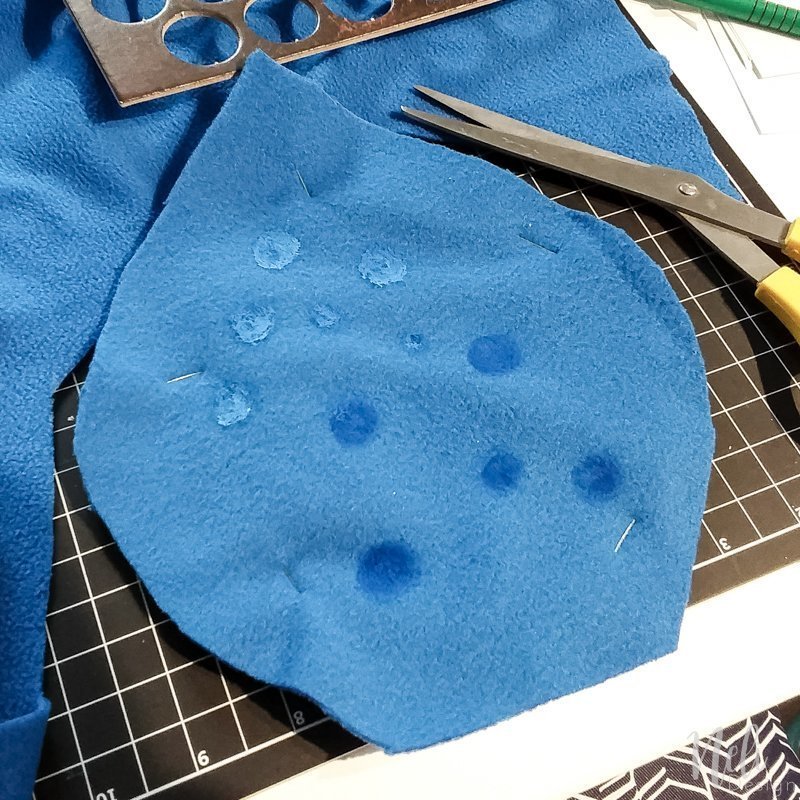 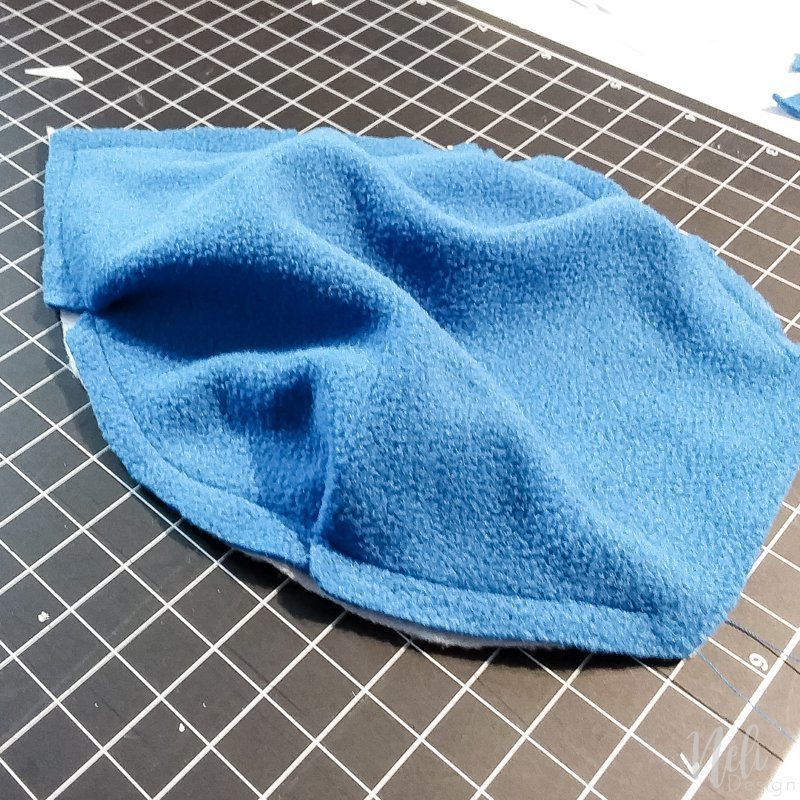 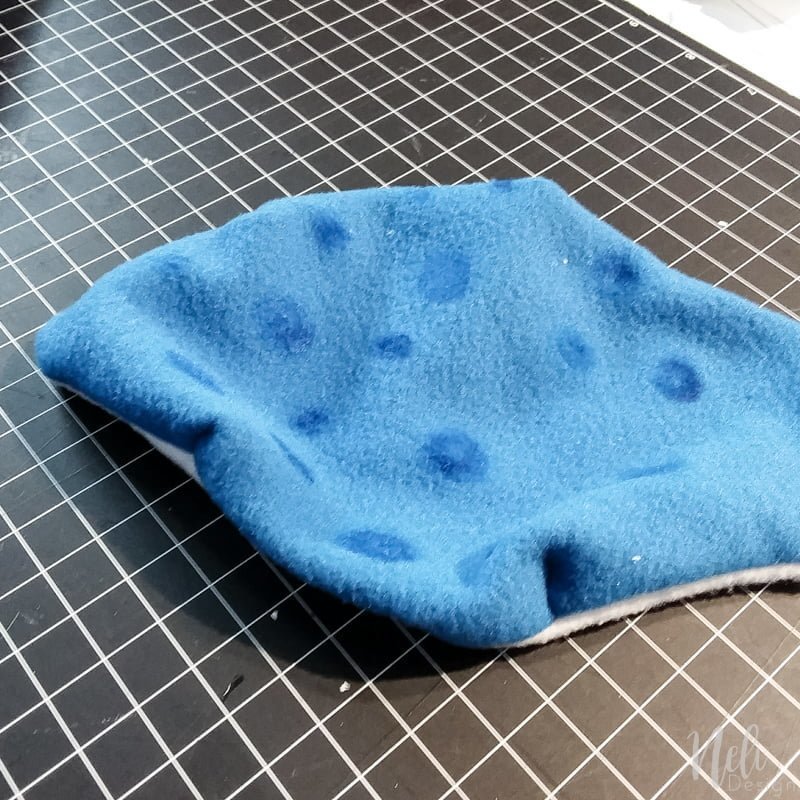 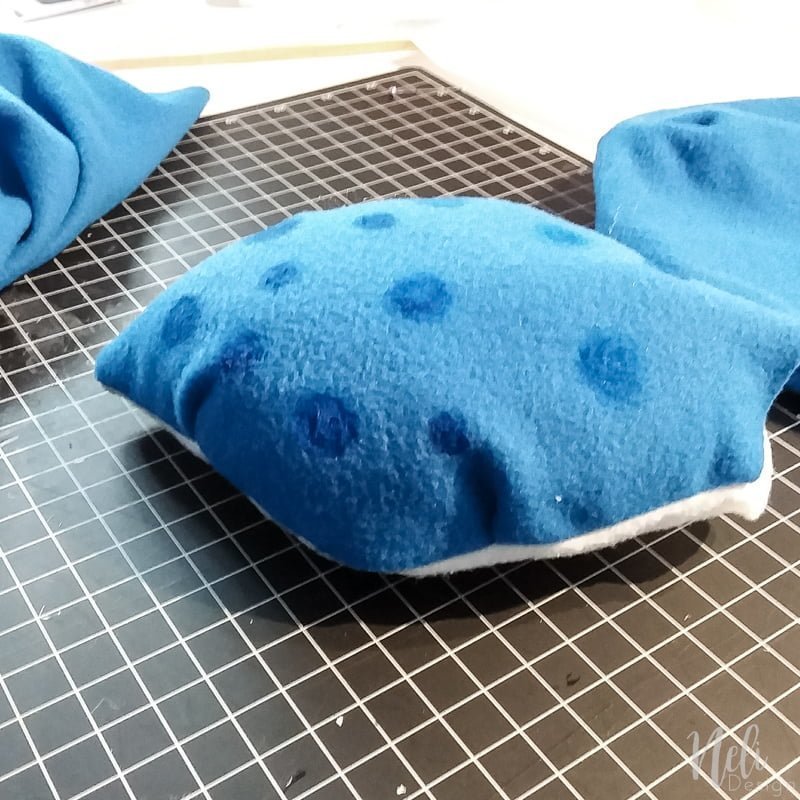 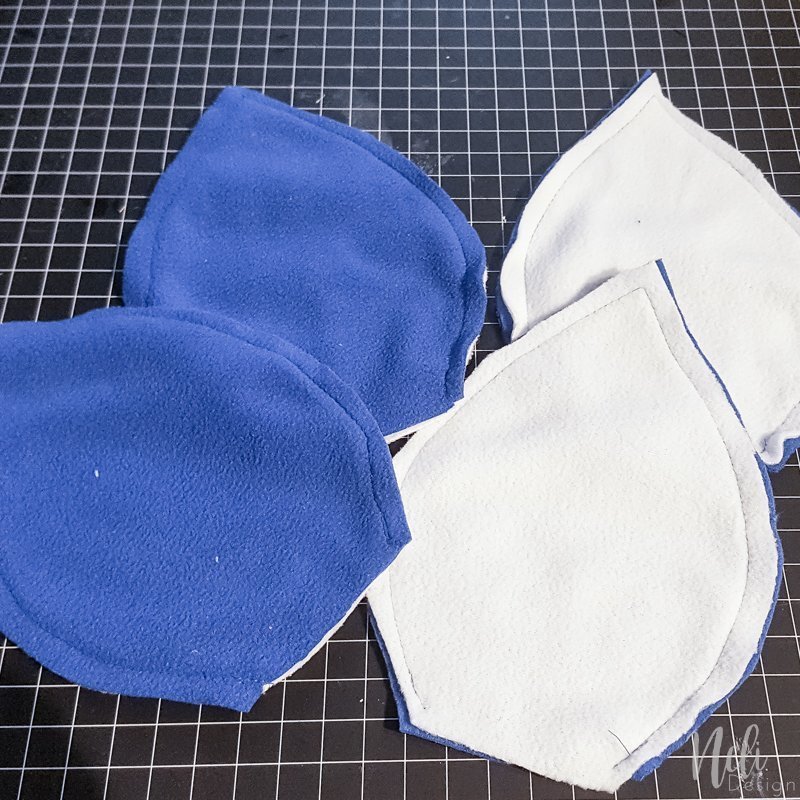 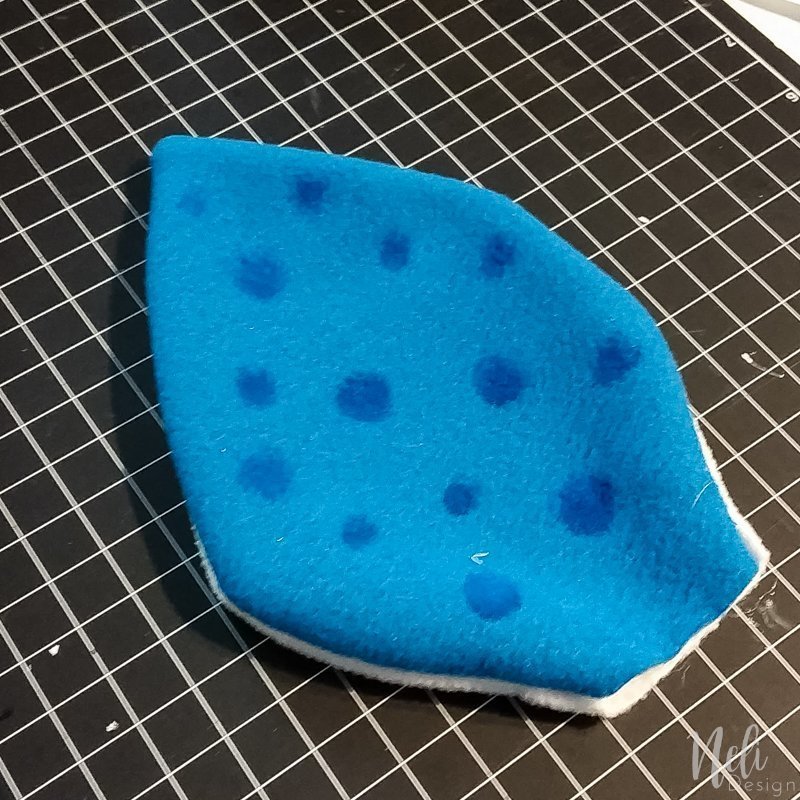 I sewed the others and then painted the blue dots.

Attach the tentacles to the hat

Once the tentacles were filled with polyester fibre, I’ve closed them with a single stitch with the sewing machine (1). 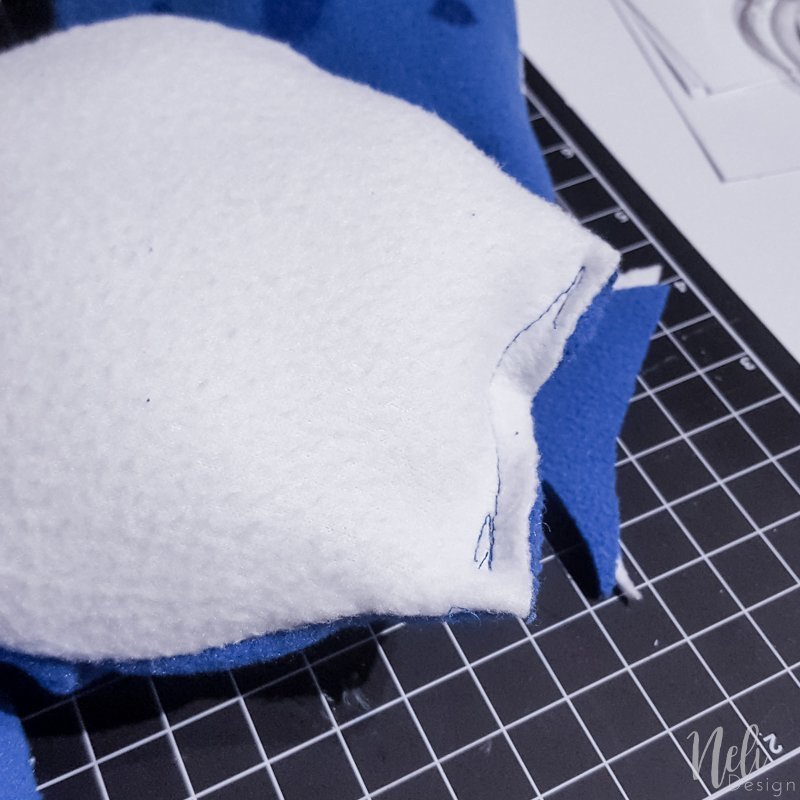 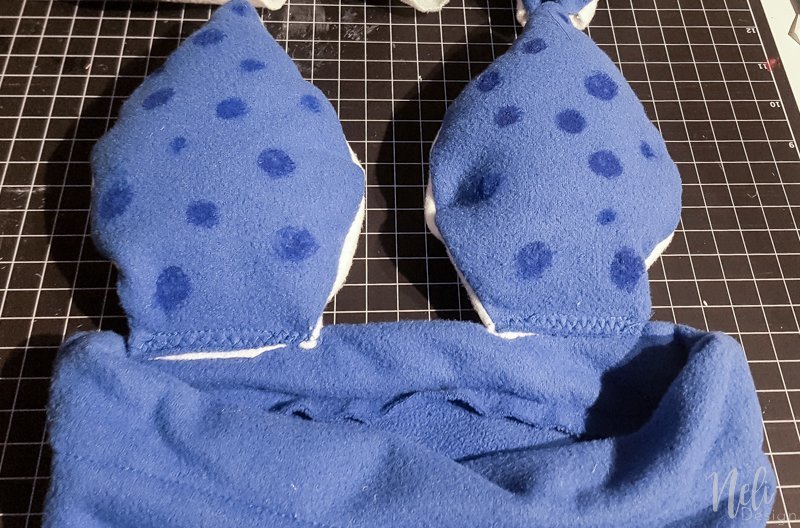 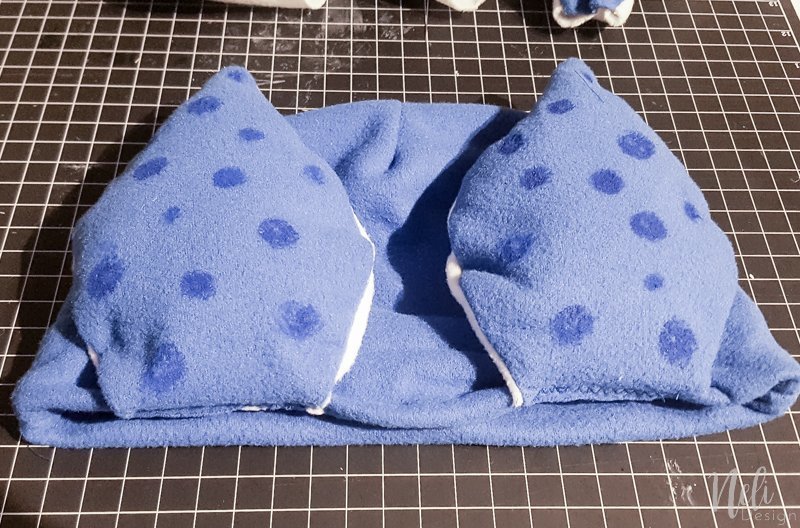 I sewed the tentacles on the inside rim of the hat (2). The central one, the largest, should be slightly above the other two. Finally, I sewed the 3 tentacles behind at the end by placing them in line with the ones in front and under them. 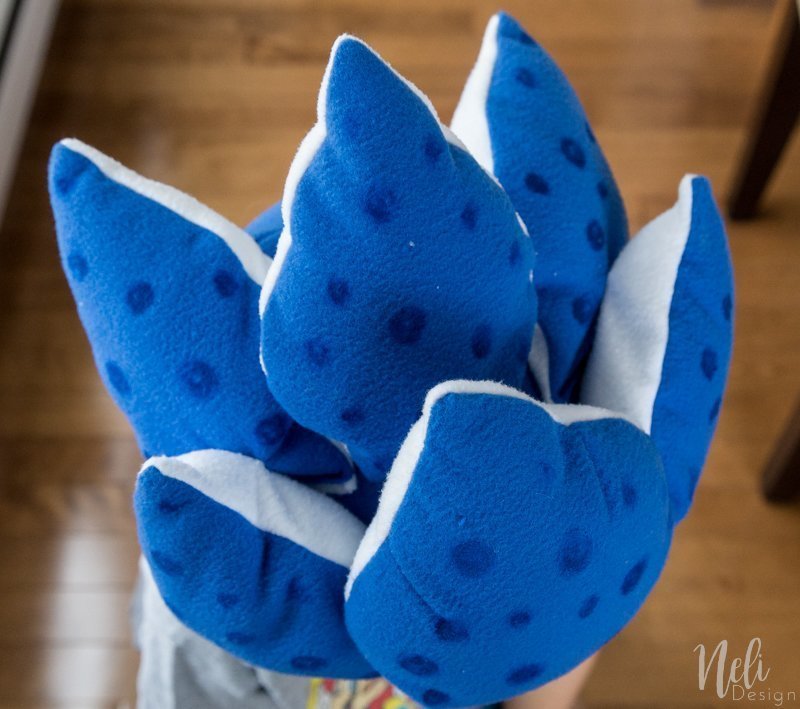 My little client didn’t want any ears on his costume, he didn’t find them beautiful! (But it would have been easier to do !!) So I made headphones. 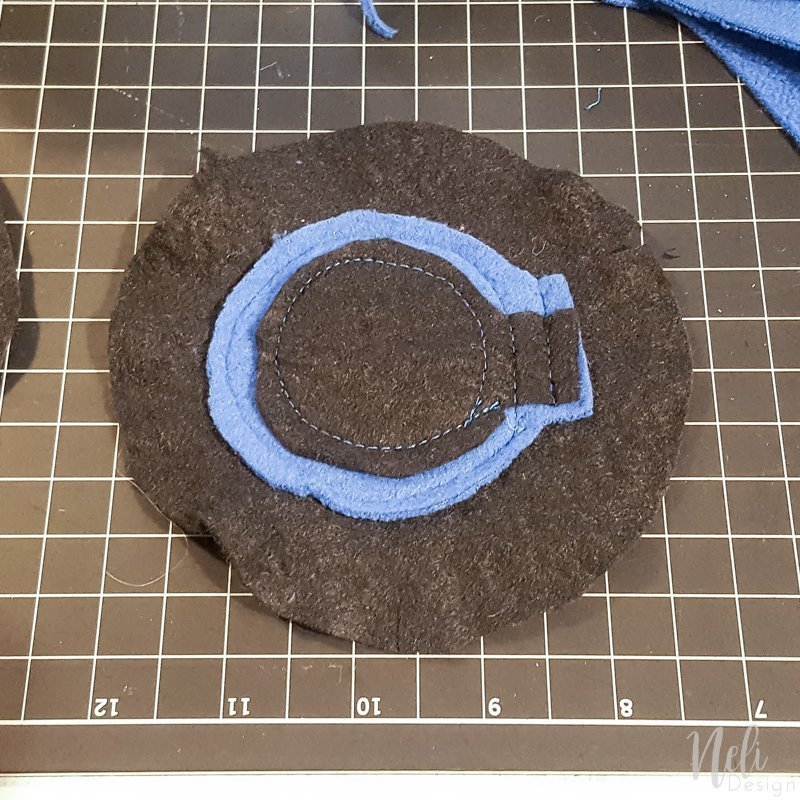 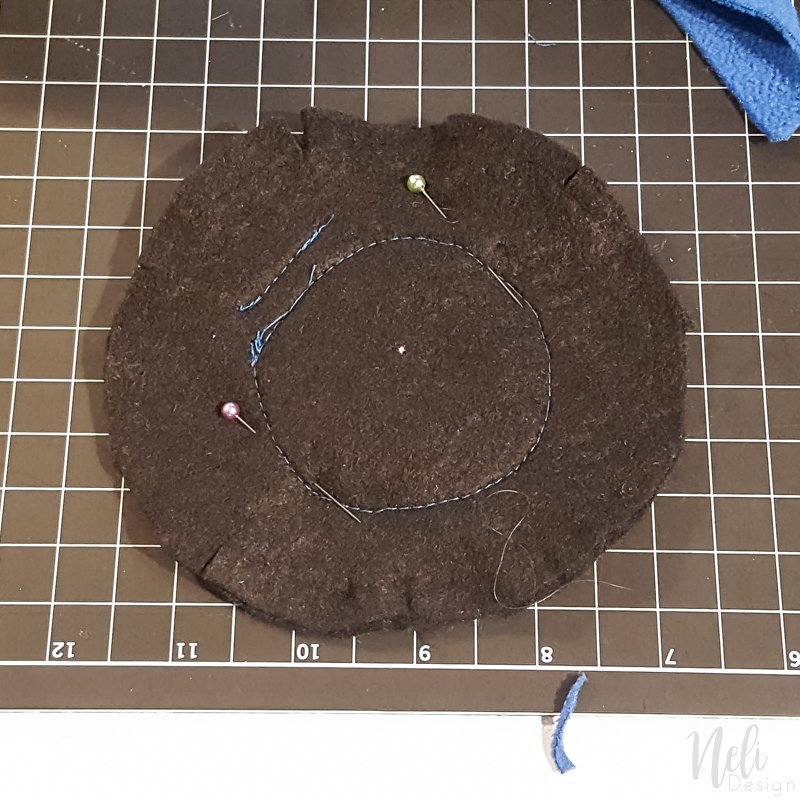 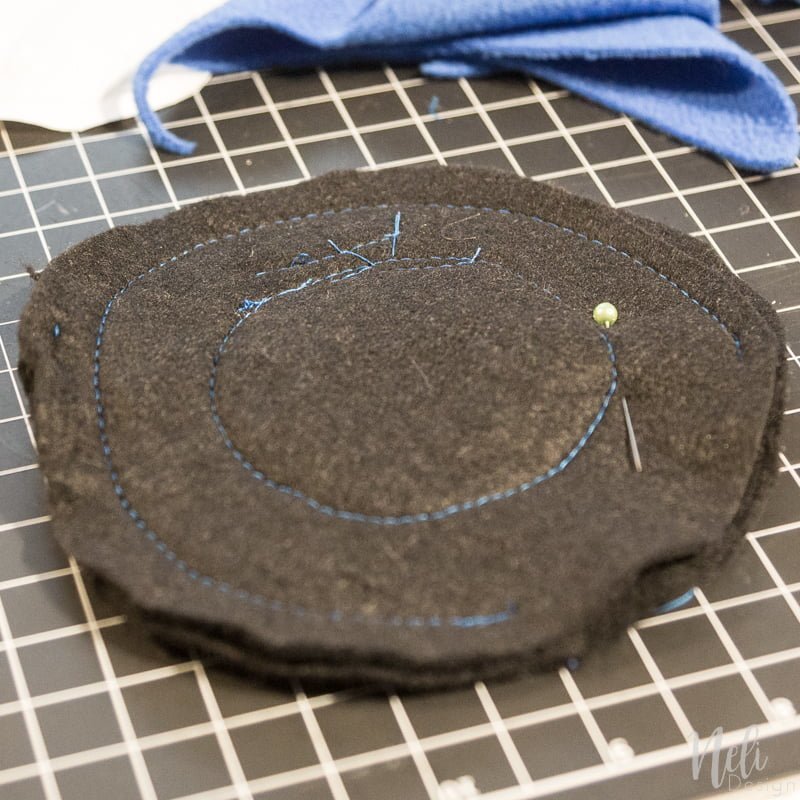 Just cut the number of pieces shown on the pattern. Sew the two smallest pieces on a large black circle (1). Assemble the black circles face to face (2). Sew leaving space to turn it inside out (or outside in??) (3). Fill with Polyester and close. Sew the headphones to the hat. I also added a long black piece to connect two headphones together. 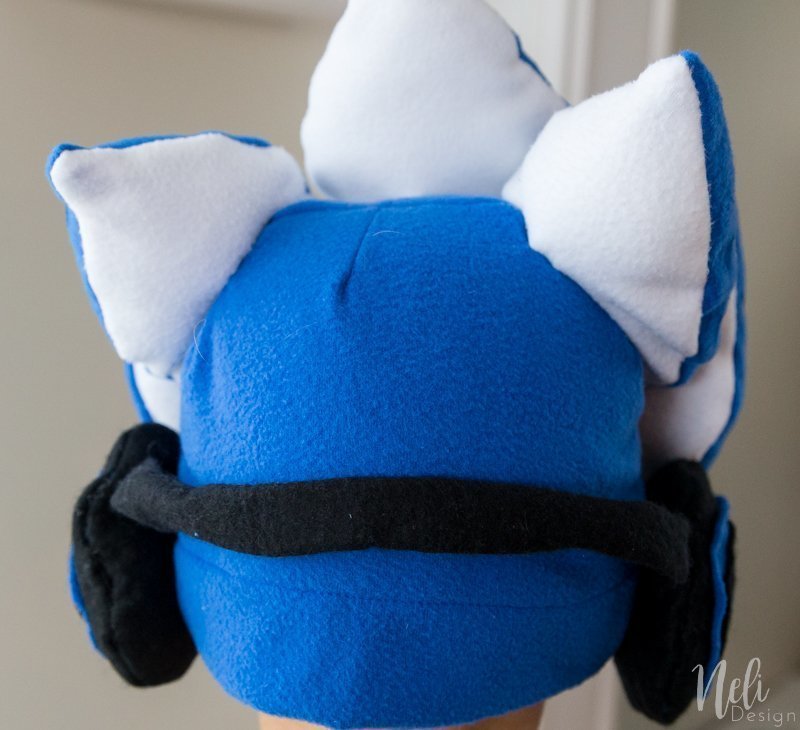 Note that my little boy didn’t want me to take a picture from the front  “yet”. He wants to save it for when he has all the parts of his costume (very cute!) 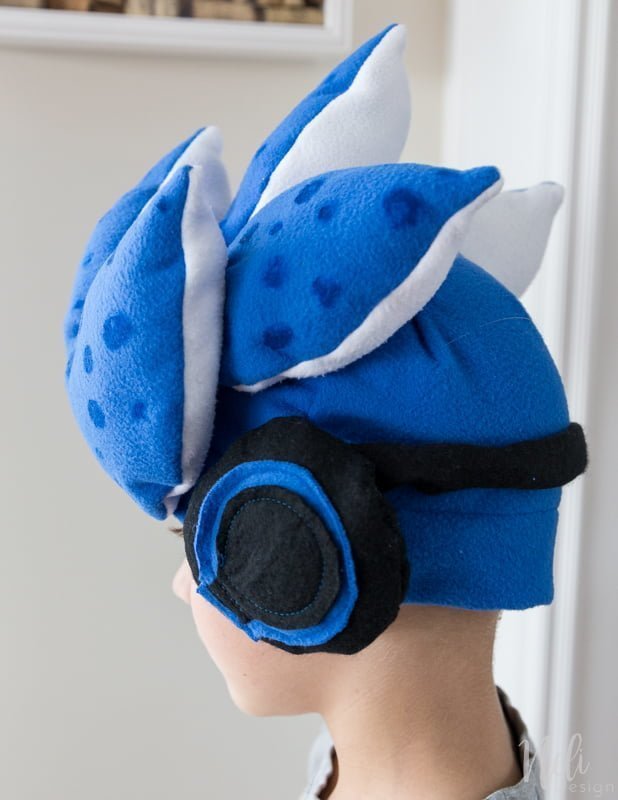 So come back in the days to come and find out how I made:

Check out my Facebook page to see other Splatoon costume people made with my templates.

If you’re interested to get them too, just subscribe below! I now have the SVG cut file available! And don’t hesitate to also send me your pictures, I love to see them!

Here’s some other cool stuff on the Splatoon theme I found :

Please don’t forget to Pin it!